A colleague in Foundation’s Redcar team who has been named one of the Redcar and Cleveland Inspiring Women of the Year said she was “taken aback” at the win.

Kendra McCormick is an Assistant Support Worker at the Redcar refuge, where she also supports women attending the domestic abuse Freedom Programme.

Kendra’s journey with Foundation began eight years ago when she came into the refuge following an ex’s attempt on her life. 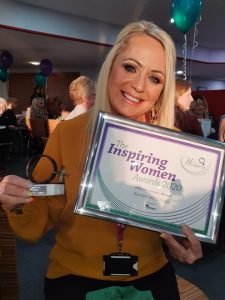 Kendra with her award

“I thought, if I don’t get out of the car, I’m a dead woman. He’d already stabbed me three times and was taking me down to the beach to kill me. I flung myself out of the car, breaking my own leg. My friend came to get me and brought me to the refuge.

“It was first night’s sleep I’d had in years. I felt safe for the first time in my life.”

“I’ve done the programme three times, and I carried on doing it after I left. It’s fantastic. For women, coming into refuge is the biggest emotional rollercoaster, it takes a few times to take notice and to realise that what’s happened is abuse – often it’s been going on so long, you don’t realise it’s abuse anymore.”

After Kendra left the refuge she was invited back as a volunteer to help facilitate the Freedom Programme.

“I thought I wouldn’t be good enough, but Kira and Emma at the refuge showed me what I have to offer. They said I needed to come in because I’d be really good at supporting other women.”

Kendra then went on to apply for an Assistant Support Worker post at the refuge, joining Foundation in October 2019.

Kendra was nominated for the Redcar and Cleveland Inspiring Women of the Year Awards, an annual ceremony celebrating exceptional women in the region. She won the Volunteer Award on the night.

“I’ve never been so scared in my life, when they told me I’d won I started shaking, thought I was going to faint! I was anxious and terrified, but my heart was bursting with pride. There were so many amazing women with inspiring stories, and when I think of all the women who have helped me, they are the real inspiration.”

“He said ‘you’ll never amount to anything, you’ll always be in the gutter where I left you.’ After 12 years of that, you believe them. This is an ‘in your face’ to him.”

“I can still see the shadow of myself running through these corridors. But now I’m in the office, doing referrals, calling head office, and winning an award.”

“I’ll be celebrating with my children and grandchildren, doing a glee dance!”

The ceremony was held at The Wilton Centre in Redcar on March 6th. Kendra made a video about her journey from client to volunteer to colleague, which is available here.