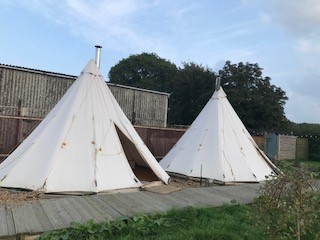 The group gathered together and prepared food and equipment for the trip before heading to Allerthorpe Lakeside Park for some raft building.

The group worked together to produce two sturdy rafts. They then took to the water for a spot of competition collecting blocks for points. It wasn’t long before both teams ended up in the water.

Afterwards an adventurous twosome spent some time jumping into the lake from a bridge. Despite the cold water all did really well and a couple of the young people overcame their fear of open water. 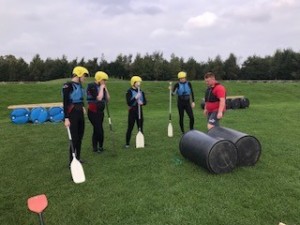 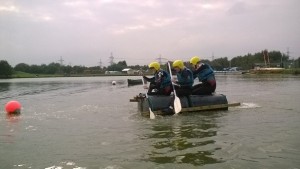 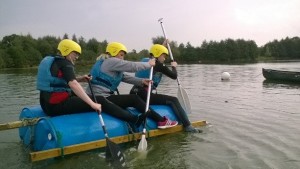 What I liked most was building a raft to cross the lake. Something I have never done before.

What I liked the most was the result of how well the raft turned out to be.

I wish we could have spent more time in the lake, having more activities, maybe canoeing.

Wish we could have spent more time jumping in the lake.

One thing I learnt was group skills

One thing I feel more confident in doing is working as a team.

After a quick shower it was off to Wild Harvest.

On arrival all the young people seemed very taken with the off grid Tipi accommodation and quickly decided which one they would like to be in for the next 2 nights. A quick look around the camp showed that everything had to be heated over the fire, and water had to be carried in from the courtyard. Lighting was by candle light or solar powered fairy lights and there was limited mobile and internet signal! 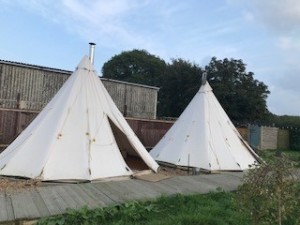 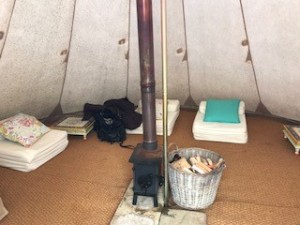 The group then had a quick introduction to the next two days with Di, camp leader. We discussed the different types of disaster that all lead ultimately to needing knowledge of the five F’s – finding shelter/food/fluids/first aid/fire.  We also discussed expectations of participants based around the Seven Deadly Sins in Survival Situations (sloth, greed etc.). If we are going to survive we all need to work together. 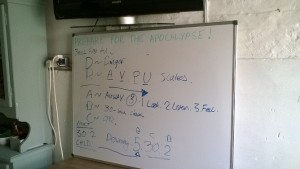 It was then time for a well-deserved dinner. The young people topped their own pizzas and cooked them in a wood fired pizza oven. This was followed by a dip in a wood fired hot tub before hot chocolate, popcorn and marshmallows, all prepared over an open fire. We even learned to make a paper cup to hold our popcorn.

It was then time to watch a movie on survival to learn from mistakes that have been made.

After such a long day it was time for bed.

The group was woken early by the camps alarm clock, the cockerel. The first task of the day was to get the fire going for light and warmth before having a cup of coffee. As the sun rose it was time to start cooking breakfast of bacon and eggs collected fresh from the hens.

The morning was spent learning valuable first aid skills including CPR, drowning, dealing with wounds and fractures. The group will now have a nationally recognised First Aid qualification and more importantly, skills which could save someone’s life! 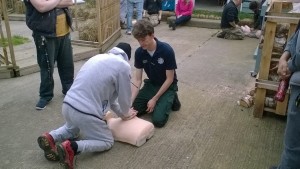 I feel more confident in applying first aid if needed.

What I liked the most was learning skills that will help me later in life.

I wish we had spent more time on exploring a wider range of first aid.

One thing I feel more confident in doings is renewed my first aid training, a refresher course.

After lunch the group headed to the nearby woods to learn to build a shelter. They worked together to build a lean-to shelter with a reflector to help direct any heat from your fire into the shelter. The group were also shown how to find and purify water.

Later the group made a simple leather pouch to hold tinder before having a fire lighting session. They were shown how to find tinder and fuel in a variety of situations and how to build a fire. All customers had a go at starting a fire with a flint, one of the more challenging methods of starting a fire, one customer was the first person to actually start a fire, after a demonstration, using a flint stone and a tinder cloth – a real achievement!

What I liked most was building shelters and making fire.

One thing I learnt was how to make fire from flint and steel.

“One thing I learnt was how many different ways you could clean water and which was most useful.”

What I liked the most was finding the resources to make a shelter, learning new ways to make a fire and how to craft a leather pouch.

I wish we had spent more time on looking and exploring different types of shelter and crafting a wider range of different leather pouches.

One thing I feel more confident in doing is crafting a leather pouch.

One thing which could have been improved… Nothing!

Dinner was then cooked over the fire before another movie was watched, this time a light hearted survival guide to the zombie apocalypse.

Another early start due to our noisy neighbour. After breakfast it was a session on finding food, foraging/hunting, growing your own and storing essentials.

It was then time to have a go with a bow and arrow and some instinctive archery. After a practice session it was time for a little competition, which came down to the last arrow, hitting the bullseye! 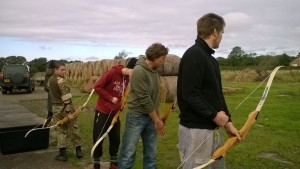 “One thing I learnt was how to stand in the position needed and also shooting the arrows at the target.”

What would you like to do in the future – “Come back here for some afternoons for a few hours to do archery again.”

“I wish I could have spent more time on archery”

One thing I learnt was learning to shoot more accurate with a bow and arrow as I have only fired them once before when I was a child.

I feel more confident in holding the bow correctly and firing arrows in the right direction.

Lee was a good instructor and would love to try archery again.

What I liked the most was training in a different way.. Plus I got a bulls eye with my last shot!

The group then went foraging around the site and learnt five different plants that they could eat. They also had a look at the aquaponics system, which combines fish keeping with growing plants for food. They collected various plant and made a salad for lunch with these ingredients. We also had a look at the bee hive, and could see the honeycomb inside. Di told us that they will harvest a small amount of honey in the spring as the bees need the food they produce to survive the winter.

After lunch was a session on wild medicine, and how in the past food and medicine were not separate, and there are many things we can eat that help to heal the body. The group then made an anti-viral tincture to help treat colds and an anti-bacterial wound ointment. 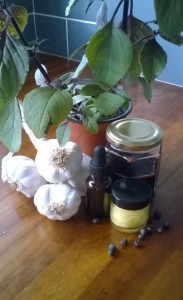 After this it was time to pack up and head home, everyone was tired but said how much they had enjoyed the experience. They were all looking forward to a lie in past 5.30am the next day!

Staff were pleased with the way the group engaged with all the activities and the way they came together as a group. They seemed happy just to sit chatting around the campfire, and were very keen to get involved with the cooking of food using open fire! Everyone benefitted from being out in the fresh air all day.

We had positive feedback from all the trainers about what a lovely group they were and how enthusiastic they had been. Everyone has said they would like to return to learn more skills

Paul Dore Bushcraft said ‘I was asked to teach a group of young lads some Bushcraft skills. Despite coming from less than ideal backgrounds and not knowing each other, they pulled together and had a great couple of days. They learnt new things about the world around them and about themselves. So proud of these lads for all they achieved and hope to see them all again in the future!

Springboard staff are now looking into activities that could follow on from this, and have already contacted Di and Paul to see if they will run another short workshop for our young people later in the year.