Barnsley Futures Play All Out for Suicide Awareness

Holden House customers and staff attended a six-a-side football tournament in aid of Suicide Awareness Week and a very generous local garage owner, Service Plus Auto Centre, agreed to sponsor the team and paid for team shirts for everyone.  Support Worker, Yvonne reports:

The event took place at Barnsley Football Ground in September but due to the bad weather was moved indoors to the Barnsley Academy where the Barnsley boys team play.  There were 8 teams taking part and each team played 8 games before the final knockout began.
The team looked smart as they moved out on to the pitch ready to do battle for suicide awareness.  With a mix of staff and customers the sense of camaraderie was great.  Some staff and customers turned up to cheer on the team and I brought the oranges and bottles of water to keep them going. 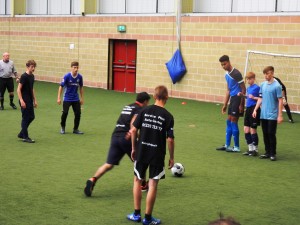 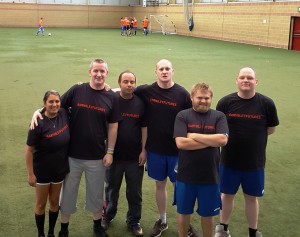 Unfortunately we did not win the tournament but we did win a raffle prize of a box of chocolates which has been donated to use as part of our Macmillan Coffee Morning Fundraiser on the 29th of September.   Everyone thoroughly enjoyed the day and left the pitch feeling they had achieved something good, something worthwhile and helped others along the way. Don’t just take it from me, here’s how a few others reported back on the day!
“ We had a really fun day out, it was amazing and we also helped others at the same time.  Amazing!” – Jodie (Customer)
“Had a good time, was really fun but oh boy I ache all over today”- Kurt (Customer)
“The highlight was when we scored” – David (Staff Member)
“Had a fun afternoon, really enjoyed the day” – Alan (Supporter)