Gabby*(all names in the story are changed) has received support from our Redcar Domestic Abuse services. Her Support Worker shares her powerful story.

Gabby got together with Leo twelve years ago. He was just out of prison for armed robbery. She believed everyone should be given a chance and that they could have a good life together. Leo moved in with her and very quickly things started to change. She tells you herself she was no angel but she now realises she did not deserve the cruel beatings, mental torture and constant cycle of abuse Leo subjected her to. After the beatings he always attended hospital with her, to make sure she got the story right͛. She nursed her mother through cancer for 15 months. During this time the abuse was relentless and getting worse. She confided in no-one through fear, anxiety and hopelessness.

The couple became an agenda item at more than one MARAC (Multi-Agency Risk Assessment Conference) meeting. Professionals genuinely believed that in Gabby͛s case there really was no hope as Leo͛’s hold and grip on her life was so powerful that she wouldn’t engage with support services. We never gave up on Gabby and finally she started to accept our support. 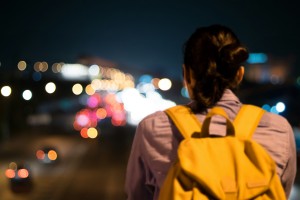 The path for her since this decision has been fraught with fear, anxiety, self-doubt and let-downs. We have a criminal justice system that expects victims to have the strength to give evidence and support prosecution on serious assault charges, amidst constant technical adjournments out of their control. We keep supporting Gabby to stay resolute and strong. We let her know how much we respect her for what she is doing, not only to help herself escape from a violent abuser, but also for sending out a message to other women in her situation.

Gabby finally gave evidence at court, a powerful Victim Personal Statement. The outcome was that the perpetrator received a custodial sentence. Since giving evidence Gabby has gone from strength to strength. She is determined to be a positive role model for other women subjected to violence. She is having an article published in ‘Take as Break͛’ magazine and as a thank you for our support, she is donating the proceeds from the article to our service to help other women.