For Black History Month we have been shining the spotlight on our wonderful black colleagues, volunteers, and clients, so we caught up with Sewanu, an Offender Wellbeing Navigator at Directions, who is celebrating one year working at Foundation this month!

We spoke to Sewanu about his time with Foundation and his role within Directions. We discussed Black History Month and what this means to him. Sewanu openly spoke about some of his experiences and what we can do now to make changes for black communities.

Sewanu started working with in October 2021 as an Offender Wellbeing Navigator at Directions. Directions is a male-only service of Foundation providing a wide range of tailored support across North Yorkshire to ex-offenders reportable to probation in the community or in custody. Sewanu explained that he chose to go into this role as he wanted to make positive changes within the community and the role aligned with his key values. Sewanu has a passion for supporting individuals towards change and making the world a better place.

Within his role, Sewanu focuses on the goals and aspirations of the clients, he gathers all the information he needs to support them in the best way. The clients’ situations are all different and he makes every effort to understand where they are coming from and what they need to achieve their goals.

Sewanu said that his experience with Directions has been fulfilling and he finds great joy in supporting people to follow the right path and make changes in their lives and reduce their risk of reoffending.

Sewanu said: “To live in a peaceful world, we need to support, interact and engage with those who have been in prison and give them a second chance… we are all humans and there will be common interests between us all.”

We took some time to discuss Black History Month and what this means. Sewanu moved to the UK over ten years ago from Nigeria, he came to study at the University of York and has been working and living in Yorkshire since then. For Sewanu, Black History Month is a time to remember the history of black communities and the suffering that they have endured through slavery and colonialization for the last five generations. Sewanu said that there is “always hope” and he remains optimistic that eventually things will be better.

He said: “Changes have been made, not always in the right way… it is important to look at what we are doing now as this is where change can happen.”

Sewanu shared some of his experiences whilst living in the UK. He highlighted that he has been mistreated by various individuals, whether in supermarkets or out and about. He was never sure how to deal with these situations, as he said: “we are never taught what to do.”

Often, he would be getting accused of something or someone would assume the worst about him. In these situations, Sewanu takes a peaceful approach and remains calm, as retaliating would not help. Getting all the information, checking if there are witnesses around and reporting the situation to the relevant people is key for Sewanu, as the more people speak out, the more impact this has.

Recently, Sewanu has joined the Ethnic Minority Network at Inspire North. He enjoyed the network’s event in September and hopes things like this continue. Sewanu expressed that having a network is a brilliant idea to meet and discuss the challenges faced by ethnic minority employees. He is keen to learn more about what the network does within the organisation to ensure people are equally represented.

This Black History Month the theme is ‘Time For Change: Action Not Words’ and as Sewanu expressed, the more we do now the more likely it is that we can create change together and we can build a better place for us all to live in. 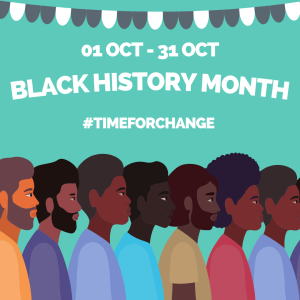